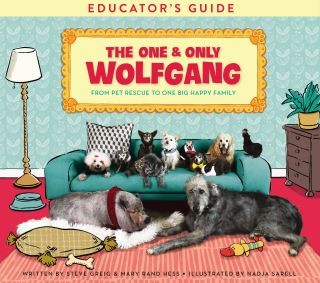 The One and Only Wolfgang Educator's Guide

From pet rescue to one big happy family

Steve Greig is an accountant whose passion for animals has led to him becoming a sought-after advocate for pet adoption. He has appeared on television and been covered by many publications, including NBC Nightly News, ABC News, Fox 5, Animal Planet, Bravo, Rachel Ray, Today.com, Huffington Post, Country Living, PetInsider, Susie’s Senior Dogs, The Dodo, and more).

Mary Rand Hess is a poet, mixed-media artist, screenwriter, and New York Times bestselling author of Solo and Animal Ark: Celebrating Our Wild World in Poetry and Pictures, both coauthored with Kwame Alexander.