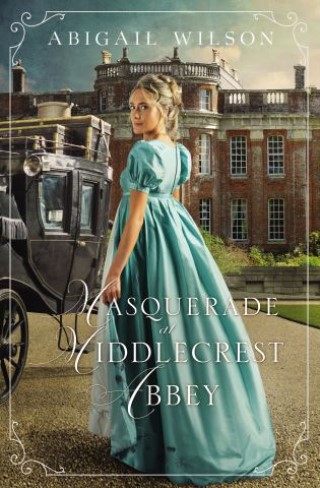 In this new Regency romance, a young unwed mother must protect her heart from the charms of her convenient new husband, Lord Torrington. She is not, however, prepared to protect her life.

When the widowed Lord Torrington agreed to spy for the crown, he never planned to impersonate a highwayman, let alone rob the wrong carriage. Stranded on the road with an unconscious young woman, he is forced to propose marriage to protect his identity and her reputation, as well as his dangerous mission.

Trapped not only by her duty to her country but also by her limited options as an unwed mother, Miss Elizabeth Cantrell and her infant son are whisked away to Middlecrest Abbey by none other than the elder brother of her son’s absent father. There she is met by Torrington’s beautiful grown daughters, a vicious murder, and an urgent hunt for the missing intelligence that could turn the war with France. Meanwhile she must convince everyone that her marriage is a genuine love match if her new husband has any hope of uncovering the enemy.

Determined to keep her son’s true identity a secret, Elizabeth will need to remain one step ahead of her fragile heart, her uncertain future, and the relentless fiend bent on her new family’s ruin.

“Murder is far from no one’s thoughts in this delicious new romantic mystery from Abigail Wilson. With scandal dodging every turn of the page, mystery hiding behind the visage of each character, and a romance brewing with an English rake of the worse—and best—sorts, readers will find nothing lacking! I was entranced, mesmerized, addlepated, and not a little bit bewildered as I wandered the halls of Middlecrest Abbey.” —Jaime Jo Wright, author of the Christy Award–winning novel, The House on Foster Hill

“From the very first page, I was enraptured! Masquerade at Middlecrest Abbey has intrigue, mystery, and suspense beautifully enhanced by the vulnerability revealed through memorable characters making this story impossible to put down. A must-read recommendation, this story is exactly what makes me love reading!” —Natalie Walters, author of the Harbored Secrets series

“Suspicion shades the affluent grounds of Middlecrest Abbey in this riveting novel by Abigail Wilson. The artful balance of mystery and romance cleverly blends with the Gothic tones of Regency England. With exquisite prose and a layered plot, Masquerade at Middlecrest Abbey is a compelling story not to be missed.” —Rachel Scott McDaniel, award-winning author of Above the Fold

Abigail Wilson combines her passion for Regency England with intrigue and adventure to pen historical mysteries with a heart. A registered nurse, chai tea addict, and mother of two crazy kids, Abigail fills her spare time hiking the national parks, attending her daughter’s gymnastic meets, and curling up with a great book. In 2017, Abigail won WisRWA’s Fab Five contest and in 2016, ACFW’s First Impressions contest as well as placing as a 2017 finalist in the Daphne du Maurier Award for Excellence in Mystery/Suspense. She is a cum laude graduate of the University of Texas at Austin and currently lives in Dripping Springs, Texas, with her husband and children. Connect with Abigail at www.acwilsonbooks.com; Instagram: acwilsonbooks; Facebook: ACWilsonbooks; Twitter: @acwilsonbooks.