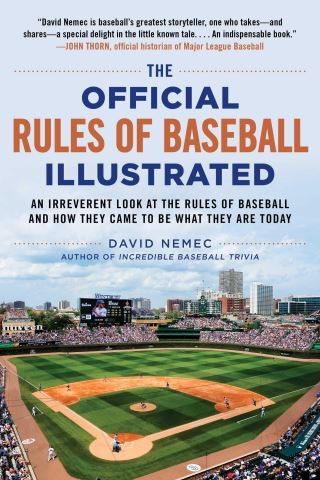 The Official Rules of Baseball Illustrated

Completely updated and expanded through the 2019 baseball season!

In a game that has been our national pastime since the 1850s, there have been countless changes, additions and adaptations to the rules of baseball. But while the sport has altered considerably in recent years, its essence is still deeply rooted in its early history.

Completely revised and updated through the 2019 baseball season, David Nemec has brought back into print his renowned book The Official Rules of Baseball Illustrated. Along with providing a thorough investigation into the rules of the game and how they came to be, Nemec explains the reasoning behind many of the modifications, both large and small, and in so doing furnishes numerous examples of the specific instances that led to a particular rule being created afresh, rewritten or excised from the rule book entirely.

Whether we’re talking about the uproarious “Pine Tar Game,” harrowing home plate collisions, or the constant fine tuning through the years to maintain an equilibrium between hitting and pitching, fans of all ages are given a comprehensive handbook of the pivotal incidents that shaped the game as we know it today.  But The Official Rules of Baseball Illustrated is much more than a textbook on the rules.  It is rich with illustrative anecdotes throughout the game’s long history that feature many of baseball’s most famous players, umpires and teams as well as some of its most unsung.

With photographs that help bring to life some of the movers and shakers in the ways the game has evolved over time, all fans of the sport will welcome adding this book to their libraries. As The Glory of Their Times author Lawrence S. Ritter said, “This is one of the most entertaining baseball books I have read in a very long time.  Any baseball fan, young or old, will find it fun...”