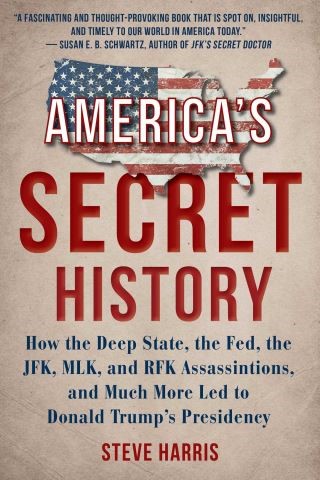 How the Deep State, the Fed, the JFK, MLK, and RFK Assassinations, and Much More Led to Donald Trump's Presidency

America’s Secret History presents an undistorted picture of the history of the United States.  Never in one volume have so many unknown facts that disprove America’s history books been brought together in a cohesive historical context, all based on verifiable information.


Not another conspiracy theory book, America’s Secret History reveals The Truth Behind the Stories They Don’t Want You to Know, weaving all of them together to explain just how we find ourselves in Donald Trump’s America.

Steve Harris: Steve Harris is a book publishing veteran of several decades with Warner Books, New American Library, and Penguin, including the last fifteen as a literary agent. He began researching the Iraq and Afghanistan wars soon after losing a friend in the Twin Towers.  One startling fact after another was uncovered and verified, until the country’s weird history revealed itself mired in myths, deceptions, and conspiracies.