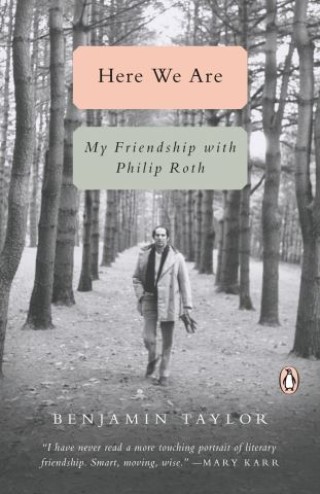 My Friendship with Philip Roth

A deeply felt, beautifully crafted meditation on friendship and loss in the vein of A Year of Magical Thinking, and a touching portrait of Philip Roth from his closest friend.

I had a baseball question on the tip of my tongue: What was the name of "the natural," the player shot by a stalker in a Chicago hotel room? He gave me an amused look that darkened in-to puzzlement, then fear. Then he pitched forward into the soup, unconscious. When I entered the examining room twenty minutes after our arrival at Charlotte Hungerford Hospital, Philip said, "No more books." Thus he announced his retirement.

So begins Benjamin Taylor's Here We Are, the unvarnished portrait of his best friend and one of America's greatest writers. Needless to say, Philip Roth's place in the canon is secure, but what is less clear is what the man himself was like. In Here We Are, Benjamin Taylor's beautifully constructed memoir, we see him as a mortal man, experiencing the joys and sorrows of aging, reflecting on his own writing, and doing something we all love to do: passing the time in the company of his closest friend.

Here We Are is an ode to friendship and its wondrous ability to brighten our lives in unexpected ways. Benjamin Taylor is one of the most talented writers working today, and this new memoir pays tribute to his friend, in the way that only a writer can. Roth encouraged him to write this book, giving Taylor explicit instructions not to sugarcoat anything and not to publish it until after his death. Unvarnished and affectionately true to life, Taylor's memoir will be the definitive account of Philip Roth as he lived for years to come.

Benjamin Taylor: Benjamin Taylor's family memoir, The Hue and Cry at Our House, received the 2018 Los Angeles Times/Christopher Isherwood Prize and was named a New York Times Editors' Choice; his Proust: The Search was named a Best Book of 2016 by Thomas Mallon in The New York Times Book Review; and his Naples Declared: A Walk Around the Bay was named a Best Book of 2012 by Judith Thurman in The New Yorker. He is also the author of two novels, Tales Out of School, winner of the 1996 Harold Ribalow Prize, and The Book of Getting Even, winner of a Barnes & Noble Discover Award. He edited Saul Bellow: Letters, named a Best Book of 2010 by Michiko Kakutani in The New York Times and Jonathan Yardley in The Washington Post, and Bellow's There Is Simply Too Much to Think About: Collected Nonfiction, also a New York Times Editors' Choice. His edition of the collected stories of Susan Sontag, Debriefing, was published by Farrar, Straus & Giroux in 2017. Taylor is a founding faculty member in the New School’s Graduate School of Writing and teaches also in the Columbia University School of the Arts. He is a past fellow and current trustee of the John Simon Guggenheim Memorial Foundation and serves as president of the Edward F. Albee Foundation.